Apice for Artists welcomes Philipp Kremer for a solo presentation. Starting point for the conversation is a curiosity which arouses when seeing in his new series of work a shifting perspective of its narrative content. This constructs an ambiguous relation within the paintings where formal principles support an abstract language on the one hand and a visual representation of an idealized subject on the other.

DA: Your approach towards cliché images is an interesting one, as the story in your paintings goes back and forwards balancing between something realistic and a staged performance. It plays with the psychological experience of time.

PK: The development of a narration that comes with a painting has to take place in the head of the viewer. Therefore, one image has to be complex enough to trigger this process. You have the first view, the second, and so on, but you can also start a thinking process, for example by presenting a conflict, like triggering two opposite ideas at the same time or being deliberately unclear about something. As this “movie” is different for every viewer, I can only control the elements that it contains or the directions in which it points. In this usage of painting, clichéd elements function as templates that everybody can relate to and become aware of how they are enriched or edited, and get an entrance into the work. At the same time, a cliché is a topic, and becomes a part of the narration itself.

DA: In that shifting process you take a reflective position. Let me quote the last sentence of the story which accompanies the exhibition, your experience in the Berlin Metro. It speaks about your observation of a woman trying to freeze her seductive image while looking in the mirroring window of the train, tracing the persistent moment back to the people sitting behind that window. And the narrative continues, as the ‘perfect image’ falls into reality. So in a way you also open up the space that is in between subject, object and viewer when constructing a scene.

PK: The relation between the three, as well as expectations and ideas about their roles become important when you use clichéd or idealized subjects. But by being serious and lyrical in the formal execution, and having an experimental approach toward the method of constructing an image, I aim to contrast this certain irony in order to keep the ambiguity in the content and a distance towards being just gestural. The other way around, the game with the subjects becomes a tool that enables me to create playful images, and to experiment on a formal level. The text illustrates this reflective relation.

DA: In order to interchange the connection between narration, image and protagonist you surely make formal decisions. For example your use of  contrasting colors and harsh (often white) surfaces which is accompanied by more freely brushed colors and light movement in the paintings. How do you see those two opposite directions – of representation and expression – operate within your work?

PK: Everything in the paintings is abstracted, flattened. Some detailed elements like Flowers and Faces require more shapes to describe them. After a completely flat organization of the surface, I charge the painting with subtle elements like red cheeks, smiles, a little glow on a surface, a shadow or reflection. I can intuitively play with what gets charged and what not.

DA: What I especially notice in the works is the overwhelming presence of the color white, in a way that these flattened parts interrupt or even confront the figuration.

PK: My idea for these images was to include everything that interests me in painting in one image. In order to carry all this content, there needs to be a resting element, something that refers to the layers of this process. I think this is what the white does, it cuts everything into decorative shapes, that points back to the method, without being completely cut off from the narration. 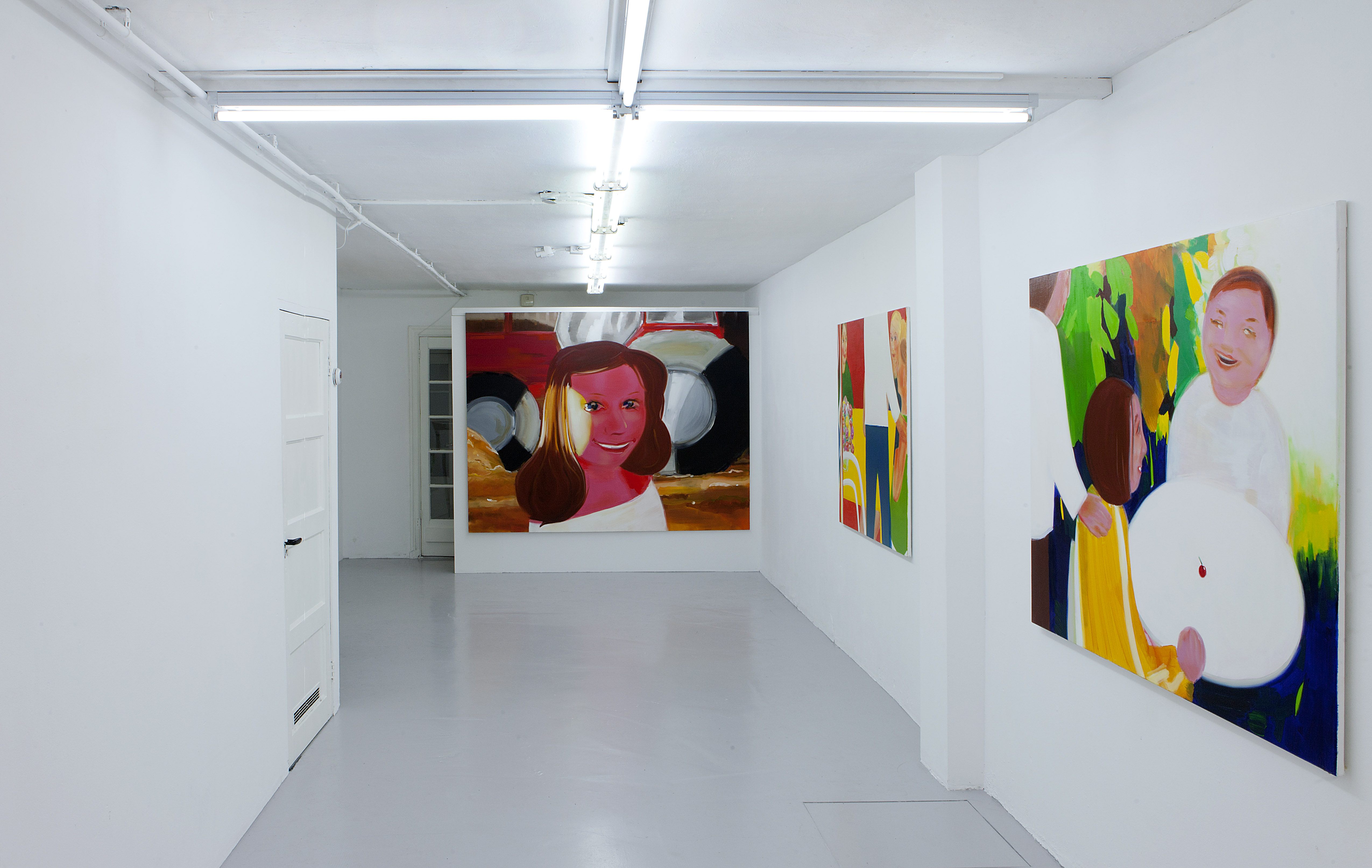