DA: What interests me in your paintings is that content and form are so interconnected that a kind of tactile reality comes into existence. This has much to do about atmosphere and energy.

RZ: At this point, I would like to point out what is painting, painting for me is a psychological artifact solely existing upon the possibility of painting language, i.e. painting language here refers to the very physical reality constructed from material based methodology, paint applied on 2 dimensional surface, in which no content or concept would exist without this physical fact. Either content appears first or the form which carries it happen, or the other way around, the result (the final finished actual painting) is there. The merging of such two aspects becomes only one result in my work, the delusive state of mind of such a virtual reality activates human consciousness. Our activated consciousness (by confronting with these paintings) does not necessarily have a story-telling line or a goal to rationalize what we perceive. It functions as a demonstration, a possibility, a path, and a chance for reaching out what is lying behind daily life in social reality: the perceiving ability leads to human psyche yet allows us to dive into our very own personal reality (in which we would discover great similarities among the others). As unlimited human consciousness, these works are endless, without any judgment or distinction towards neither intellectual brain-work criteria nor separated sentimental emotion. Thus this tactile reality, this atmosphere and this energy are united life supply which painting as visual art can give back to us.

DA: This united result becomes a vivid sensitivity, something that you really can experience. The title of the exhibition SYNESTHESIA refers to this phenomenon of mixing senses.

RZ: About choosing SYNESTHESIA as the title of this exhibition, I wanted to refer to the two different aspects that repetitively appear in my work for many years: human figure and pure shape (I have been questioned for many times from different people through the years). I am very well aware of that shape (abstraction) and human figure are recognized as two separated aspects in art history, but for me, I do not tend to separate them. As in my work there is a large part in the process of making is the work of subconscious sensibility, which clearly drives me to be purely interested into both abstract shape and human figure at the same time. I believe such an existing fact makes no use for me to struggle to choose from one to the other to fit into established art definitions, why should I? More important, my interest is not focusing on defining my work in relation to fit in, but the very free dedication towards the open possibilities of painting methodology. So in this sense, SYNESTHESIA is a literal reference pointing out what I want to achieve in painting is to find spontaneous balance of different aspects without giving them order which appear in my work and recognize them as one united fact. If a synesthete experiences mixed sense between sound and vision, this is a very good example to describe what is happening in my work regard to pure shape and human figure. On the other hand, I am not ignorant about the existing art world, on the contrary I am fascinated by its evolution in centuries, and this is why I want to push painting forward not backward. I do not believe the existing of painting is a historical record holding what we have accomplished by taking it as a tool in our civilization. I think painting as fundamental medium drives the artists today still dedicate to, to communicate their consciousness pattern in such a particular way. We are alive as the primal humans who picked up mineral rocks to draw lines, shapes and figures in the cave to reach out our inner psyche with no boundaries. It is not an easy way or traditional way. It is an on-going phenomena still happening in our society. Artists choose painting not as cultural statement, but as ontological reason to fulfill the very primal motive to express the undeniable transcendence of human activity.

DA: In your paintings the colors become vivid, I experience them. This is the direct opposite of using colors to construct an image. In your work the color black for example is purely a color. It is what it is in its presence. So there is no co-ordination towards a so-called reality we are familiar with. But only a visual evidence of dimension, of line, of shape or color, in terms of pure form of appearance.

RZ: The proposition here is still about what is painting: a total reality of itself which exists solely upon its own logic and reason, which might talks about physical reality we experience in our daily world or in fact take this reality as a starting point, but it has no responsibility to duplicate such a reality into the reality of painting. I am feeling very grateful that there is a reality of blue sky, and also there is a reality can be black sky.

DA: For this exhibition the central question was how the figures could contribute to your process of constructing different textures and layers within the paintings. In LITERAL DEFINITION AGAINST REAL PEOPLE, I see people with sacked heads, and in the photograph, you etched the heads into a shape. Can you explain this process with the title ‘Literal’ and ‘Real’. Where does ‘literal’ refers to, and what is ‘real’?

RZ: Regard to the central question inspired us to make this exhibition, in my work I see human figures as unique given material and treat them as pure shapes, a color dot, a surface, in the reality of painting, which is similar as the function of a square shape. It is the unique texture and mass these figures interest me, not their emotional social characters. A human figure in painting does not indicate a person in our reality, as it is transformed into another material to construct a new logic of this new reality in painting, i.e. carbon based life forms is different than the 2 dimensional painted metaphor of such a life form. The observation of people I had when I was a child creates great distance from communication to simply recognizing them as abstract definition of people rather than real people, recognize them as patterns.

The title LITERAL DEFINITION AGAINST REAL PEOPLE, if I would mention the content of this work, is actually refer to the very beginning working title I had in mind to make this painting. The idea was to make a painting to realize how much we have been putting ourselves into stereotypes to perceive every single human being in this world, and actually how much do we know about each other to always distinguish them as ‘people’. The term ‘people’ exactly contains what information to make us carrying a clear mind to be responsible about what we are talking about, it is literal, it is not reality, it is then, the distinction, very very very useless. If we talk about the concept behind this work, 136 headless human figures constructed together as one abstract form, appearing in the artificial limbo on paper. The consideration of transforming an external concept into the content of painting is only possible to be based on the form of painting, yet the transformation, this decoding action is not illustration of such an idea, but to realize the independent function of painting, which has unlimited freedom to create a reality that totally convinced by its logic and language. Yet the people in the painting are not the definition of real people in reality.

DA: This distinction of literal and real becomes a shape. In the works POSSIBLE ERASING you see the process of shaping, layering and etching. But you still recognize a human figure.

RZ: Yes, it is a sort of exaggerated try out leads to the same path i have about my work, 5 portraits are erased as much as possible and to keep the ‘vision’ in a minimal defined condition, to try to find out how much the trace could remain and disappear at the same time, and what was the evidence to identify a painting in its finished state. The title is working title to indicate the action of making this work as content in relation to what appears on the painting.

DA: I consider the work AURAEGOS as the essential abstraction in content and form.

RZ: Besides what have been discussed above about pure shape and figure, something more to say about this series is that in the restriction of given information on paper, to erase any detail that contains unrelated information by creating thick layers of painted shapes, to produce a manipulated common character. To erase something is to create something else at the same time; the creation is based on the deconstruction, vice versa. The artificial shapes are real entities in the form of painting, but also imaginary aura in the content. The paradox of form and content in this work is what I am interested. To take the function of pure shape in my work to a slightly different approach but still very much relate to what position I have always given and trying to give to the meaning of pure shape.

DA: The work SHE and MIRROR OF LOVE, LOVE MIRROR, repeats the essential abstraction from the series AURAEGOS presented on the table. We see a pattern and a texture. For me this represents the perfect balance of uniting the two worlds of form and content into one painting.

RZ: I agree with you at this point, and I do have a brand new way to understand these two works relate to my other works. Its like a mental puzzle I accidentially putting together. Thank you. Adding some words to MIRROR OF LOVE, LOVE MIRROR, its about what i call ‘the ready image’. For several years I sometimes paint on ready images, such as photograph and etching, which functions as pure material, too. It is a merely unique layer and texture created by machine rather than by bare hands.

DA: The work OCD stands a bit aside but it fits well in the exhibition. It has much to do about what is visible, and what is not. Volume and emptiness. The work goes beyond the literal question, and deals in a more general way with your practise.

RZ: I also think works with different ‘styles’ made by same artist in different time periods are very much inner related. The process of making art is a life process, certain questions carried out 20 years ago can still be traced today, which might seems like different approach, but it is a whole united development.
Something I want to say at the end, for all my life I have dedicated only to painting, at some point of understanding this form, or lets say this language, it is the emergence of sense, no technique is to be seen, and no trace is to be found. 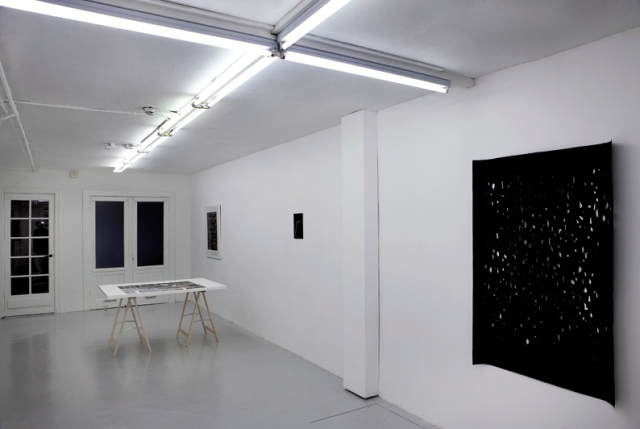 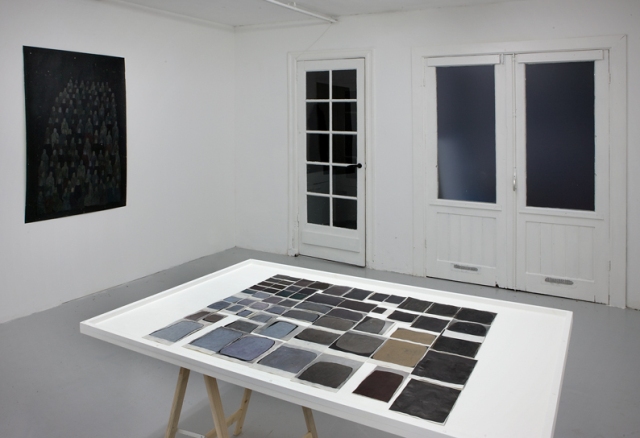 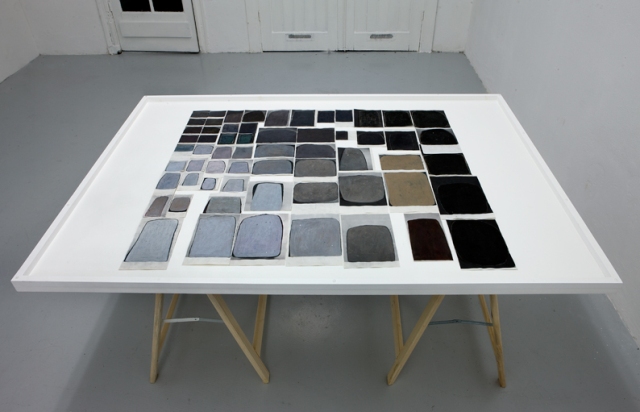 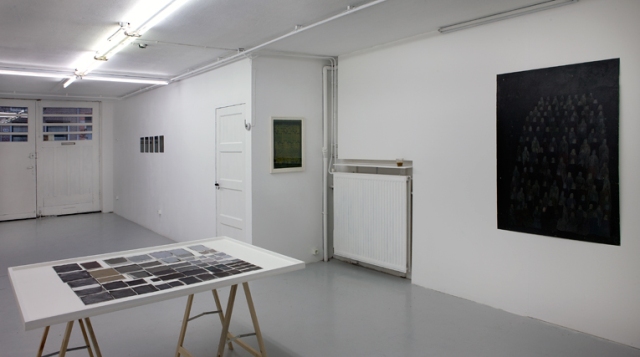 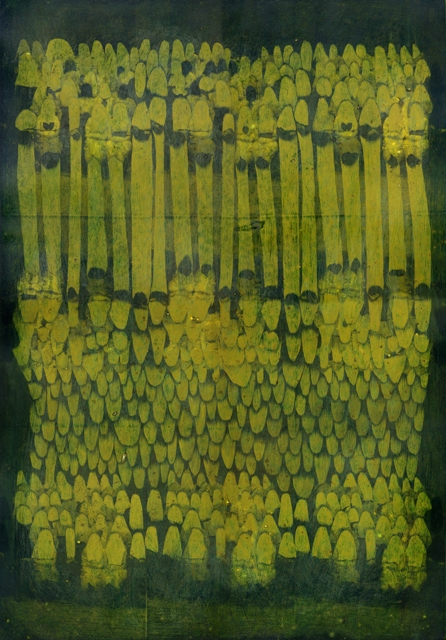 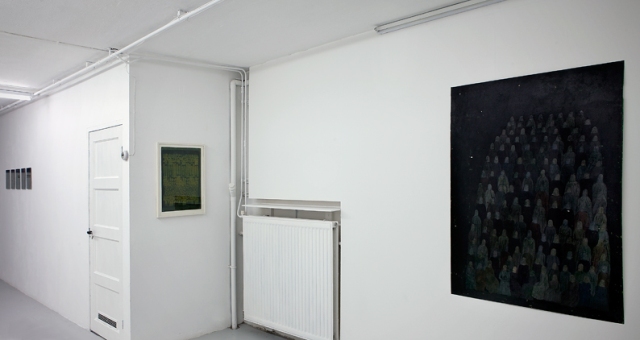 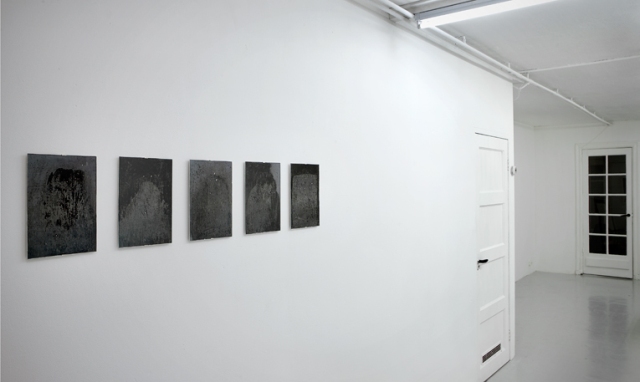 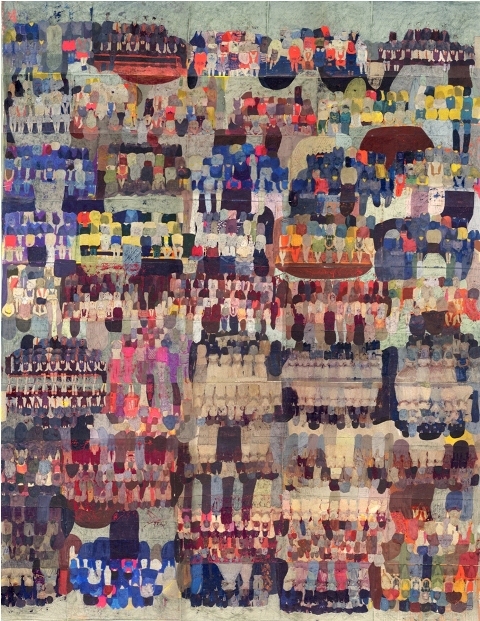